1. Very good protection against severe COVID-19 caused by Omicron, even among those aged 65+, who have received 3 vaccine doses

In an updated report (briefing #34) from the UK Health Security Agency (UKHSA), they find that those who have received three vaccine doses, confers ~90% protection against hospitalization with COVID-19 due to the omicron variant, dropping slightly to ~83% at 10+ weeks. In contrast, the effectiveness after only two vaccine doses was initially at 58-64%, but dropped to ~44% after about 6 months time.
At the same time, a U.S. preprint study from Tartof et al. (Table shown here), found that even after three months after the last vaccine dose, those who had received three mRNA (Pfizer) vaccine doses had ~90% protection against hospitalization with COVID-19 due to the omicron variant. In contrast, those who had only received two vaccine doses had ~70% protection against such hospitalization, both at 3-6 months, but also after 6 months time, after vaccination.
In another British report that covers adults age 65+ and who had gotten 3 vaccine doses, protection against severe COVID-19 with the omicron variant was found to be:
This shows that very strong protection can be achieved in the older population, even against severe COVID-19 caused by the omicron variant. This also fits with the present data for hospitalization: even during Omicron, most of the hospitalized cases in New York are unvaccinated. However, currently it’s not known for how long this protection may be maintained at this level (we lack data at this point), but long-term protection against severe COVID-19 is typically maintained far better than that against infections (see here for a meta analysis).
However, the drop detailed below for protection against mild (symptomatic) COVID-19 due to Omicron shows that our present vaccines were not designed against this variant – but again, protection against severe outcomes is maintained very well in 3-dose recipients for over 2 months.
As detailed in the later summaries further down, protection has still been very good over time against the Delta variant.  And remember, our flu vaccines require updates every year because we encounter a new version of the influenza virus, every year. Updated (targeted) versions of the COVID-19 vaccines (of the ones approved) are supposedly underway.
The same analysis also examined vaccine-mediated protection against (mild) symptomatic COVID-19 caused by the omicron variant, in the 65+ age group (for protection the broader adult population, see the next summary further down):
A potential limitation with the above analysis is partly that it was based on a rather low number (98) of hospitalizations, so the findings may have some biases: “These results should be interpreted with caution due to the low numbers and the possible biases related to differences in vaccine coverage and exposure to Omicron in different population groups“

Below is a screenshot of Table 1 from the Jan 7 (2022) analysis from the UK Health Security Agency – this applies to the age group 65+, but as detailed above, the data seems similar for based on a broader age group.

This new preprint by Willett et al. is based on 1.2 million inhabitants tested during early December when Omicron became dominant. On average, boosters were received around mid October (so ~7 weeks prior to (on average) testing positive in early December).
What’s also notable in the preprint data from Willett et al. is that two vaccine doses did however provide good protection against the previously dominant Delta variant (green bars in the screenshot below). However, clearly 3 doses are needed to enable protection against infection itself with the Omicron variant (at least for a certain time period).

Here are some other studies that detail the protection against infection or symptomatic COVID-19 caused by the Omicron variant (please note that I also list Delta variant-specific protection for some studies):

Tseng et al.: Recipients of 3 doses of Moderna’s mRNA vaccine had an initial vaccine effectiveness around 95% (93%-96%) against infection with the delta variant, but a lower 62.5% (56%-68%) against infection with the Omicron variant, in those who were recently (~5 weeks earlier) vaccinated. In those who received their third dose around 15 weeks earlier, effectiveness was ~49%.

Andrews et al.: Here 3 vaccine doses provided around 70-75% protection against symptomatic COVID-19 caused by the Omicron variant, in an analysis based on 56,439 Delta and 581 Omicron cases, and 130,867 test-negative controls.

Similar data was more recently reported in the 34th technical briefing from UKHSA:

Below is a screenshot from Figure 1 from Andrews et al. (described above) 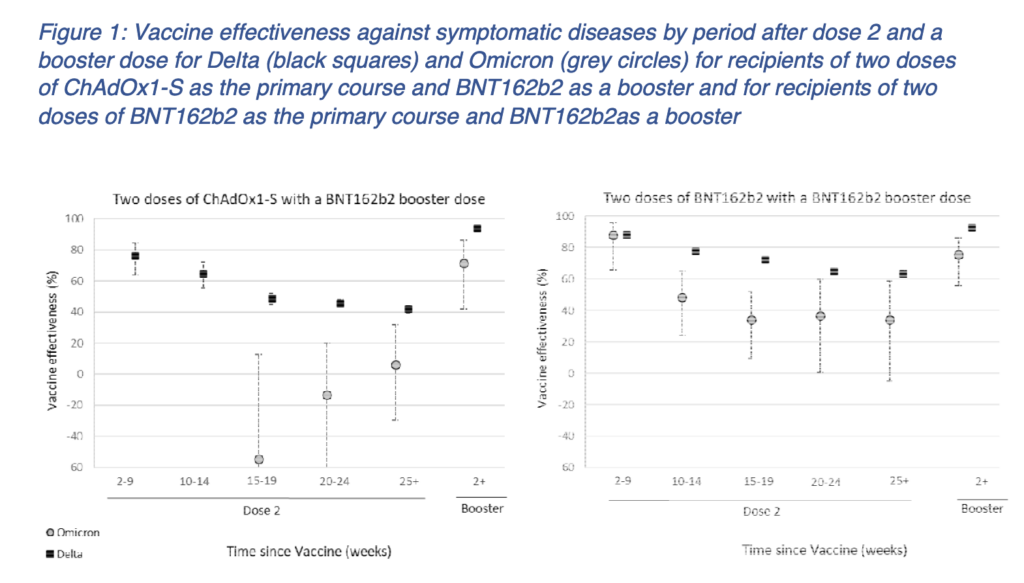 3. During the Delta period vaccines continued to provide good protection against infections and hospitalization – especially with an added third vaccine dose

This is from a preprint by Drawz et al., with data from Minnesota that included 4.5 million patients (and a test-negative design), and included data from August 29 to November 27 2021 – that is, a period when booster doses were recommended in the U.S.

After six months, a second mRNA vaccine dose offered ~45% protection for Pfizer recipients, and ~65% for Moderna vaccine recipients, against infection with SARS-CoV-2, during a period when the Delta variant dominated.  With a third (booster) mRNA vaccine dose, these figures rose to ~88% and 91%, respectively.

Against hospitalization, six months after a second dose, vaccine effectiveness against COVID-19 hospitalizations, was ~67% for Pfizer recipients and ~73% for Moderna vaccine recipients. These figures rose to 88% and 86%, respectively, in participants who had received a third (booster) dose.

What this data also shows, is that in the 19-64 age groups, even at the 6-month time point and from just two mRNA vaccine doses, protection was very good against severe COVID-19 caused by the Delta variant.

However, at the same time, the data shows that in individuals who had a range of co-morbidities (that are known to increase the risk of severe COVID-19), protection was quite low against hospitalization with the Delta variant, from just two mRNA vaccine doses. However, almost across the board, that protection increased significantly in those who had received a third (booster) dose of the mRNA vaccines.

That protection against hospitalization is maintained well over time, even against the Delta variant of SARS-CoV-2, is also supported by a November 2021 preprint meta analysis, by Feikin et al..

An example of a (preprint) study that was included in the above meta analysis, and which showed high vaccine-mediated protection over time against hospitalization and death, is the 2021 preprint by Lin et al., which has since been published in the New England Journal of Medicine. This is based on data from ~10.6 million North Carolina residents. That study found that at 7 months after the second dose, vaccine-mediated protection was >80% against symptomatic infection for Moderna mRNA vaccine recipients, and ~67% for Pfizer vaccine recipients (again, this does not cover Omicron). At this 7-month time point, protection was at an even higher 89-94% against severe COVID-19, and 90.5-95.5% protective against death due to COVID-19, among recipients of the Moderna and Pfizer mRNA vaccines.

Below: a screenshot from the preprint by Drawz et al., showing vaccine-mediated protection from Pfizer’s vaccine (PFR) and Moderna’s vaccine (MOD), at a period when the Delta variant was dominant. Protection estimated for the period >6 months (“>26wks”) after 2 doses, and with a third (“booster”) dose. 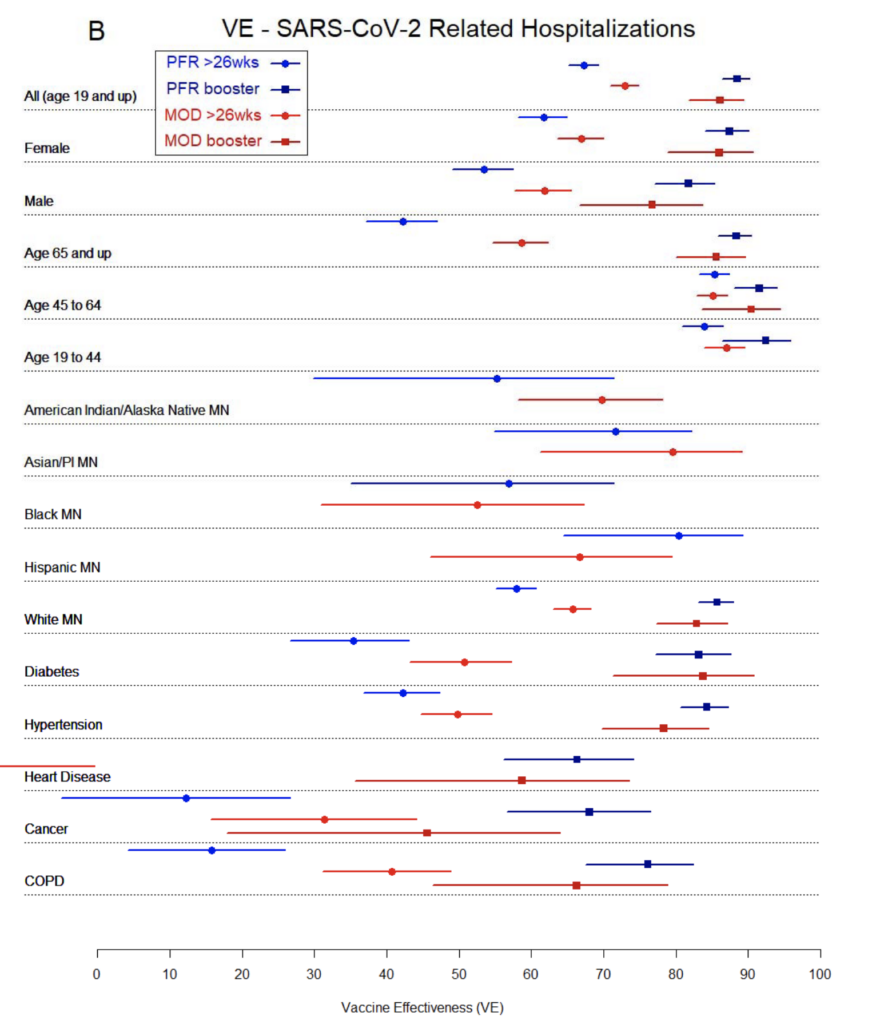 A reasonable policy by Nature about the use of LLMs for paper writing.
- LLMs are tools with accountability and cannot be listed as coauthor.
- LLMs usage ...should be acknowledged because the transparency of methods is necessary in science.
https://www.nature.com/articles/d41586-023-00191-1

Very excited to share my first paper from my PhD!

The benefit of bivalent boosters for enhanced, ~80% protection from hospitalizations and deaths (vs vaccine plus prior prior booster or unvaccinated) has now ...been shown in 6 countries (Israel, US, Denmark, Norway, Finland, Sweden)